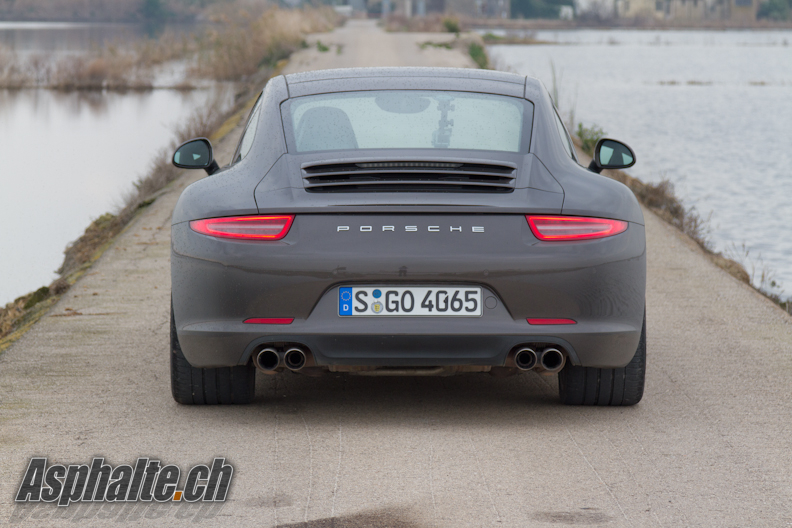 Extracts from our discussions with Michael Schaetzle, project leader for the 911 range.

PDK or Manual ? Michael confesses a soft spot for the 7 speed manual, but is quick to point out that the PDK can make use of the electronic limited slip differential in ways that the manual can’t. The difference is most perceivable in slippery or snowy conditions where a manual 991 cannot keep up with a PDK car (a comment which reminded me of the F1-Trac differential on the Ferrari 430 and the software limitations imposed on manual 430s). Michael added that the development of the gate of the manual box was a challenge because of the limited width of the central console.

7’40’’ on the Nordschleife ? Yes. The 991 matches the factory reference lap times of the 997.2 GT3 and Turbo models, and does so with more ease (read less cold sweat) than its predecessors. The winning recipe is a 997 Carrera S with PDK (-1s over the manual), 20mm lowered chassis (1-2s, for aerodynamic reasons), sport chrono pack for the dynamic engine mounts inherited from the GT3, and PDCC. PCCB ceramic brakes ? No difference whatsoever on lap times.

Why such a leap on the chassis ? The 997 project was developed with a restrictive scope: to comply with new crash test regulations by evolving the 996 platform brought severe constraints that made other developments impossible. By opposition, the 991 project started from a blank sheet of paper and thereby allowed more freedom.

Competitive benchmarks ? The benchmark was the 997, it was the car to beat. There is no real competition to the 911, but products that overlap its target audience. Were mentioned: BMW M3, Audi R8 4.2 and (surprisingly) Mercedes SL.

Challenges ? Switching to aluminum for large parts of the body. A relatively new material at Porsche, who did not have as much experience as Audi (for instance) in this area. Building a robust correlation between simulation tools and prototype testing took time.

Acoustics ? Porsche is very happy with the Sound Symposer, this duct channeling acoustic waves from the intake manifold to the rear shelf, so happy that it made it to the standard equipment of the 991. The development of the Porsche Sports Exhaust (PSE) option requires precise calibration of engine mapping at throttle lift off. The recipe includes injecting a small quantity of fuel and synchronizing ignition so that explosion occurs out of the cylinder, 4 to 6 inches into the exhaust manifold, to be audible. Result is then optimal, with these glorious rattles and burbles on the overrun. If the explosion occurred any later/further, the catalytic converters would burn.

Was electric steering worth it ? Michael does not agree with the criticisms on the electric steering rack assistance, in his opinion it provides all the feel necessary to sports driving. The decision was not motivated solely by gas mileage (Porsche claims a saving of 0.1 L/100km), but also to avoid the complexity of running hydraulic lines from rear to front to power the steering rack.

Why the wider front track ? Multiple reasons. Handling first and foremost. The 997.2 GT3 RS allowed to validate these benefits. Use of aluminum also required wider crash zones around the front wheels, preserving boot volume required to push the wheels out. Designers were all for it because of the muscular visual impact on the stance of the car. The Porsche Motorsport engineers were all for it too.

Weight measured at 1519kg ? How can the difference with the 1415kg DIN claimed by Porsche for the 991 Carrera S PDK ? For Michael Schaetzle, the difference is to be credited to equipment. All launch cars are heavily optioned, this should explain the difference.

A hybrid 911 ? Unequivocally no. Too heavy, and of no interest to customers. Fuel mileage has been improved to such a level that it’s not a factor anymore in this segment.

Future versions ? No comment ! But a not so subtle hint at the fact that the 997 model history could be a pertinent predictor for the sequence of upcoming launches. Under these oriented assumptions, we understand: 1) Carrera 4 2) Turbo 3) GT3 and Targa at narrow intervals 4) GT2 5) facelift.

Proud of the result ? Of course ! The 991 revealed quickly itself as better than the sum of its parts, and easily exceeding expectations of the product development team. Michael Schaetzle’s headache is now to define avenues to improve on the 991. Ideas are reportedly scarce, as Porsche made use of all components and technologies available and relevant to such a car. A challenge that Schaetzle and his team will have to overcome.