Concept Considered: HSC with a improved and enlarged C32B Block; a 3.6 liter V6 which produced between 350 to 400PS depend on the tuning of the engine: Final phase of the HSC accomplished 0-60 in 4 seconds and ¼ mile in 12 seconds, which slot the car into 360 Modena and Porsche Turbo Cabrio territory. It was also the cheapest route Honda could have taken because little re-tooling is required. HSC chassis was a heavily modified NSX Chassis. Mr. Uehera would have been happy with the performance result of the HSC - if it was going to be built two years ago, but it was a good thing that they didn't, because the result would have ended like the original NSX, which will not fare well with the current competitors, and a V6 will not be welcome by the “press.” The introduction of the F430 proved his point. “The boss scrapped the HSC because he wanted more! Because it wasn't “stunning enough. The Original NSX was design to beat Ferrari 328 and 348, which includes the 911. However, 911 have surpassed the NSX in many areas after 15 years, and Ferrari F430 is truly ahead of the NSX in almost every way, so it's time to reset the standard.”

Target Power from two Prototype Engines:
Small V10: “around” 3.5L over 400PS @ 10,000RPM, was considered during the first phase of development, but not a desired size, and could pose major reliability issues. However, if the target weight is not met, a reconsideration of reviving this size is a possibility, if additional power can be obtain through development.
Large V10: “around” 5.0L Approaching 500PS, a more likely choice, and requested by the current CEO.
Honda will have it as the “lightest” in its class with best power to weight ratio - Just like before.

Issues faced: It is rather easy to squeeze over 100hp/liter plus on 4 or 6 cylinder Engines; however, it is rather difficult to accomplish the same task on a large displacement, let's say, a 5 Liter engine. The problem is, a traditional V10 have series of vibration problem; therefore, to solve that problem and create over 100hp/liter (at the same time) will be a major challenge (that is why Ferrari stick with V8 and V12, and Gallardo's V10 will probably not last more than 60k miles without any major overhaul, and same can be said about BMW's M5/6's V10). "There were V10 prototypes built during the early 90's, when Honda was offered a deal to supply their detune but enlarged F1 Engine for the McLaren F1 road car project; however, the idea was deleted by the bearcats within the company, because they didn't know the magnitude of that project; they were pushing to end the F1 Engine Program and to cut ties with McLaren International; therefore, the idea to supply Engine to McLaren never solidified. Imagine if the McLaren F1 had a Honda Engine...."

Standard Porsche 911 is no longer a targeted competitor, because the auto press has always prejudiced the V6 in the NSX, but somehow never bash 911's flat 6! F430 and Gallardo will be the main target, and perhaps those higher models such as Porsche GT and McLaren MB SLR Vision, because if you think about it, the performance between the F430 and SLR Vision is not too far apart, other than the top speed. “In order to compete with these cars, the HP rating will have to be over 500, and we have enough times to work out the bugs on the V10.” By the time the Neo NSX is ready for production, 500ps will be common between most of the manufactures.

Aerodynamically, the car needs to be able to sustain 200 miles per hour. An ideal shape will take great amount of time and test in order to meet that speed with great stability and safety. The approach of obtaining that speed will be genuine. I assumed he was talking about cars such as modified Vipers and Corvettes, which accomplished the 200 mph barrier, but with shady stability.

Uehera jokingly mentioned, “If the next generation NSX should last another 15 years production cycle. The car has to be a technological wonder; however, still allows major upgrades in order to compete with the future replacement of F430 and Gallardo.”

During the design process of the original NSX, exotics such as 328/348 and 911 all had “3 liter class” engines, because it was a cool thing to do in an exotic car (small block with high PS rating), but the approach changed through time. The only way to get more PS is to build bigger engines. Ferrari for example, redesigned the entire chassis on their replacements to allowed bigger engines to be fitted. That is why from 348 and on, the trunk was moved to the front and the radiator moved to the back to allow more room. This method also shifted the weight distribution more to the rear. Unfortunately, the NSX was originally designed to meet the “3 liter class,” and meet the gentleman's rule of 280ps for the domestic market, also the domestic market taxation on engine size greater than 3.0 liter was much higher, so the decision was made to stay in that class. It was a conservative move but wasn't ideal for expansion. However, the original package was ideal in a sense of performance during that time period. We had to hear complaints from Japanese domestic customers because the American model got 10 more PS on paper. “We all know Skyline GTR and NSX-R had more - way more, but we can't disclose it! There is only so much we can do to a production 3.2-liter engine. However, after the release of the new Honda Legend (aka Acura RL) - We broke the gentleman's rule, and the NSX will be our next offender.”

Again jokingly, “Ferrari lured most of our F1 Engineers to design engines for their F1 and road cars - After our (Honda) withdraw from F1 in 1992. Mr. Gato (Head of Honda V10 and V12 F1 Engine Program between 1988 to 1992) used to often called me from the Ferrari factory (where he was working) and telling me they really should slap a big H on the Ferrari's Engine Block and Ferrari F1 cars were powered by Honda.”

Since a “Large” V10 is the desired power plant, in order to offset the weight of the engine, construction Materials such as Aluminum and CF is a must - If the desire target weight is going to be met; the use of titanium is under consideration. It will help to meet the promised word of “break through.” However, the cost of manufacturing of titanium will be a major issue, because it is extremely difficult to work with. Even though the cost is not an issue, but it is. “Same thing happen when we wanted an all aluminum chassis, and the cost of the manufacturing was enormous, but we did it anyway. We are considering how to implement titanium parts other than just the connecting rod.”

As for the SH-AWD, it is under consideration, but most likely be scrap due to the weight gain, and Mr. Uehera favors MR platform only - But may offer SH-AWD as an option if the market desires it.

Honda would like to win the F1 title before the premier of the new NSX, that is why the target release date is set “3 to 4” years from now. Also with that dead line, Honda will know how the next generations of Ferraris and Lambo will have up on their sleeves. Last word from Uehera “When the CEO jokingly mentioned the V10 NSX will be faster than the new V8 F1 cars, he probably wasn't far off!).

As for the cost for the car - Honda will strategically place the car in the proper tier, just like the original NSX, little higher than standard 911, but lower than a Ferrari. Here is my interpretation from reading the article, a Ferrari F430 and Gallardo beater at Porsche Turbo price. After all, Honda does hope to sell more “New” NSX than the out going model, at a shorter time frame, but they cannot predict the world economy, so we'll have to wait and see where if the world economy can support this car, or any other car in this price tier…. The original approach of 25 cars a day and 6000 per year will not be part of the plan, because the goal wasn't realistic. After all, the purpose for the existence of NSX is not to make money, but to showcase what Honda can do. NSX is matter of company Pride - R&D cost will eventually filter down to other production cars.

Hint: The original contracts were signed with numerous parts suppliers to built 4 years worth of NSX @ 6000 cars per year, which was probably the reason why it took them 15 years to use up those contracted parts; after all, the fixed cost was paid before the car started production, there was no reason to discontinued the out going NSX if still meets the exotic standard.


Honda to unveil successor to NSX sports car in 2008

TOKYO (MarketWatch) -- Honda Motor Co. (HMC) is planning to start selling in 2008 a new luxury sports car with an advanced version of the V-10 engine used in the Formula One auto race, the Yomiuri Shimbun reported Friday, according to the Kyodo news service.

The new car is a successor to the NSX luxury sports car whose production was halted at the end of last year and will be placed as the high-end model of the Acura luxury brand, the report said.

Fully utilizing state-of-the-art technologies amassed so far, Honda intends to make the successor to the NSX what its president and CEO, Takeo Fukui, calls a "super sports car in the new era," the report said, according to Kyodo. 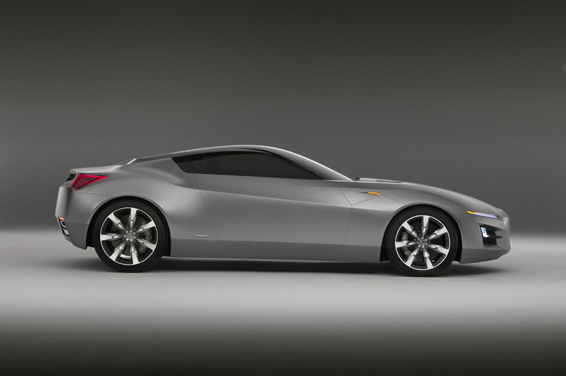